Somehing I saw on my way to work: 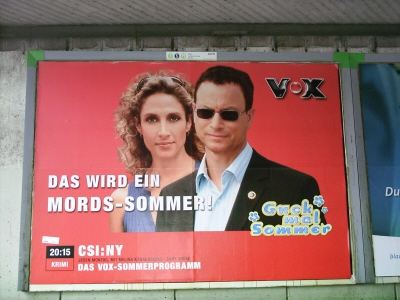 (In case you're curious: You can't really translate the caption. The closest I can come up with is, "It's going to be a summer to die for.")

Did you notice... ... that Danny and Lindsey have the exact same handwriting?

... that in "Recycling" somebody tampered with the evidence?

Exposit #1: The muder weapon, a swiss pocket knife, after Stella found it in the sewer. The scissor blade is clean.

Exposit #2: The murder weapon again, this time in the lab. The blade is still clean.

Exposit #3: The blade under the microscope as Danny compares it with the other blade found in the victim's wound.

Question: Where did the blood in the blade still attached to the rest of the pocket knife came from?

Even better question: Where did it disappear to afterwards?

... that Danny's full first name is "Daniel"? Take a look at the upper left corner of this screen cap from "'Til Death Do We Part" - it says "Daniel Messer":

... that a certain character - in contrast to another character on a TV show I used to watch - knows when it's time to let go of certain things?